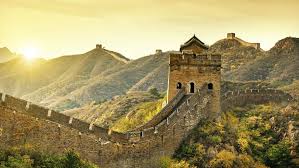 It was China Day at the Front Porch Library. My singing partner, Craig, who lived in China for many years came with cool activities and props. First we found China on the map and looked at its placement in relation to the US–both are in the Northern Hemisphere so we have that in common. He then put up a silhouette of the two countries–roughly the same size, then with cut out paper figures we compared populations, each child taping up a figure to represent a 100,000 people. Hmmm…they’re pretty crowded in that same-sized country.
He shared artifacts and gave away coins. “What are these worth?” Kelby wanted to know. Something less than ten cents. Still–Chinese coins!
For me one of the best moments was unscripted. Miss Betty, who drops off baked goods for the food pantry–a Chinese immigrant–and Craig began speaking Chinese. I watched the kids blink. Chinese sounds as far from English as the human mouth is capable of going.
Betty then talked about her own family, about foot binding and how girls never went to school, the families were too large and the boys had priority. Then a “grey beard” came to the door, a missionary, who offered free schooling for her mother, and the family grabbed the opportunity. Betty then exhorted the kids to study hard! “They can take money from you! They can take possessions from you! But they can’t take your skills!”
I had wondered why she often, when dropping off food, pointed at a kid and said, “Nine times three! Seven times six!” She knows firsthand the power of education.
Craig then showed photos of iconic Chinese sights and cultural figures from Bruce Lee, to the Great Wall, to caligraphy, to the Terracotta Warriors. He turned it into a Bingo game. “RIce paddies? Guardian Lions? Dragon Boats?
It was such a great program. Thank you, thank you, Craig!
After Craig left, Sequoia, Klark, and Kelby tore out to shoot hoops. Olivia, Brianna, Lizzie and I stayed inside to write poetry, which of course began with decorating the paper–poems didn’t necessarily get written, but the papers were beautiful.
Olivia wrote a complete poem called Sweet Dreams about a nightmare. I think the opening line was, “A spider walks down your spine, thousands more stand in line.”
It was a super day at the FPL!

I am a writer of novels for young readers. I also sing old time rock and roll in a duo called "Hot Tamale." My husband and I maintain our own 10 acre wildlife preserve. My home is Tallahassee, Florida. View all posts by slowdancejournal