Today at the Front Porch Library we took a leisurely cruise down the alimentary canal–or as the sandwich board in the driveway advertised, “From Food to Farts.” Hey, you gotta bring ’em in.

We simulated the digestive process starting with a slice of bread. By the time we’d added the artificial bile and stomach juices and were squeezing it down the leg of a pair of tights (I mean, the small intestine) everyone was fairly grossed out. Which is a testament to the human imagination since the ingredients were bread and water in various colors.

But boy, did we get down with the process. Then we took out my yarn visual aide. There was a length of colored yarn for each of the following: mouth, esophagus, stomach, small intestine, large intestine–each cut to the correct length and tied together. That sucker stretched all the way down the driveway.

We also did a very bad tracing of Olivia, then cut out all the digestive organs from colored paper and glued them to her silhouette.

And then we celebrated my birthday–I have FB to thank for that. I think I would have snuck past the fact the odometer had rolled over again, but the end-of-library party was so nice. I was led out to the driveway (party site) by Jorge, who isn’t due back at college in Chicago for a while. When he told me to open my eyes I beheld the driveway, which was a little disappointing until he turned me around to face THE PARTY!

Miss Jennifer got me a cake and chrysanthemums–enough for everyone to give me a stalk of flowers adding up to a colossal bouquet.

There was an informal conga line on the lawn dancing to the banana boat song. And then Olivia did an incredible dance she’d choreographed–and when I turned around I saw that her mother, Donna, was doing it too. Among the celebrants not already mentioned were Klark, Mr. John, Kary, Leyla and Sam, Isaac, Heather and Hanna. What great neighbors, volunteers and book buddies I have. Thanks guys! 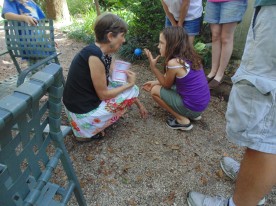