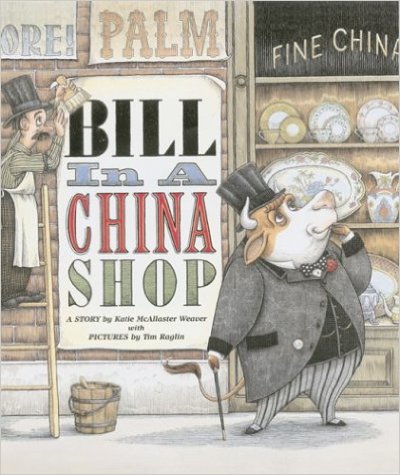 Library had barely started when the sky opened up–and of course we had to save the cartons of books outside, and the Spot It cards. And the padded folding chairs. It took all our towels to dry everyone off.

Damp, we continued indoors. We had 8 kids, Miss Jennifer, Mr. John and me. We were not a big group unless you consider we were doing library in less than half of a 900 square foot house.

We started out restrained. The read aloud was Bill in a China Shop. As you can imagine Bill is a Bull and things turned out about like you’d expect.

We then talked about the fourth of July, looked at a globe and considered how unlikely it was for tiny Great Britain to hang onto those rambunctious colonies. We learned that the Declaration of Independence was actually a Dear John letter to King George (the third, Mr. John added).

Then we did all of the following: a chess match between Dee Dee and Mr. John, Twister, Chinese jump rope, cat’s cradle, drawing and puzzle making, a failed attempt at assembling the human skeleton and puppetry.

And all the while the rain fell and the lightning struck. Dee Dee kept turning out lights on the theory we would tempt the lightning to strike us.

Even though they were still damp, Miss Jennifer and I drove the kids home. Another intense day at the library!