We had a great time at the Front Porch Library today. For the first time in a long time I had a rapt audience for a read aloud thanks to Laurie Keller and “The Scrambled States of America Talent Show.” Who knew the states could juggle, jump on pogo sticks, and have stage fright, not to mention being pun-meisters? The kids guffawed.

We continued our Thank You project. Robin W Ecker this week you will get a drawing of a very bulbous but charming horse. Robyn Davis you red hair has been thoroughly immortalized. We began to talk about our plan to send kids to summer camp to much excitement.

Miss Judy read with the kids using her literacy specialist skills to assess the kids–hey, they were all pretty good and read a lot–next week is pay day at the FPL. Pay envelopes will be passed out and interest offered to those who can leave $$ in the bank.

Miss Penny played rousing checkers with Connor and Elianna. Miss Jennifer headed up the “If I were president…” project. I was so proud of our kids. Most said that if they were president they would provide food and houses for the homeless. Except for Ray-Ray, who wrote “I would be a warrior and fight for freedom.” Ray-Ray is a first grader, a good reader, but small for a warrior. He is, however, surprisingly exacting for someone that young. He was unhappy about his printing and copied it all over on a second sheet of paper.

We got a little scufflie-ish at the end, but for almost the whole two hours everyone was happy and productive. It was the general consensus that crackers and peanut butter is a better healthy snack than corn bread and peanut butter, and that maybe either way raisins should be left off some of the healthy snacks. The orange cake was a novelty (my husband, chooser of last week’s blue cake, struck again). It was much more popular than the cornbread. Maybe Ray should be in charge of the healthy snack…

Another very fine day at the Front Porch Library. 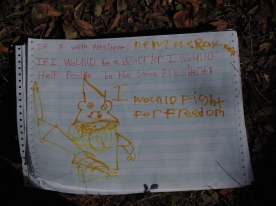