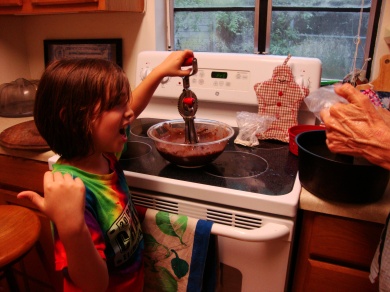 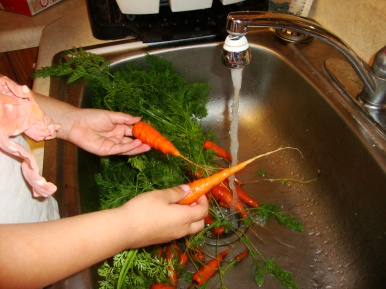 We sure were busy today at the Front Porch Library–which was a surprise because the weather has been so colossally rainy. Corine an Chloe came first. Chloe, at four, loves to kneel on a chair at the sink and wash…well…anything that needs washing. Today it was carrots from the garden. Her sister mixed up the very chocolate cake (on rainy indoor days we bake the cake together).

Joe came with a dog named Misty–not his, but he had to watch her for a friend. We put her on the porch which made the ins-and-outs a little trickier than usual. The Danny half of the twins came. The reports on the Harper half were mixed. He either had a stomach bug or couldn’t find his shoes.

Kiwili made a floor puzzle, this one a birds of North America scene that included birds that would never meet in real life, all graciously displaying their field markings.

Jackie roared up on his bike sporting a new modified Mohawk haircut. Meanwhile in the street CJ and Johnny prepared for their careers in the NBA.

The chocolate cake was served warm and you can’t beat that.