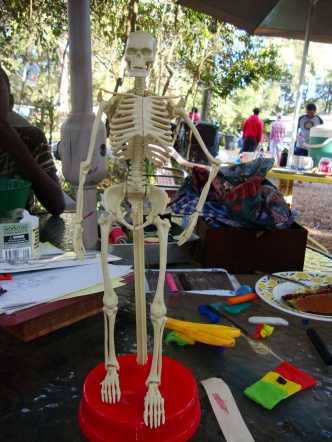 I love the Front Porch Library. It is part plan, part spontaneous explosion. We began in an orderly fashion, assembling an anatomically correct model of the human skeleton–but perhaps we did it anatomically incorrectly. Could the scapula bones be upside-down? No one holds a shrug for that long.

Zion and Zachary found a good use for the two giant balls most folks would use for some crazy form of exercise. Holding them in their arms they ran into each other and bounced off (think male kangaroos chest-bumping). There were also some relay races started by Zion. Most of us were out when he informed us that the race began, “First, jump over this chair.” 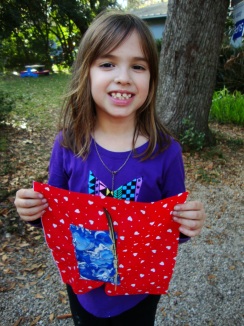 Corrin did some fast sewing–speed seemed important to her.. “Am I doing a good job of going fast?” We got a new book about feather identification–we identified at the beginning of library. By the time Corrin was sewing, the feathers were up for grabs. She sewed one (quickly) into her project.

After races in the street, shooting hoops, eating cake, checking out books, sampling the bread I’d just made and packing take-home cake and popcorn the library kids meandered down the street. The volunteers, students from Leon High School–the best bunch of FPL helpers ever–drove home. Corrin, who lives next door to the library, was driven to her door by Nick. 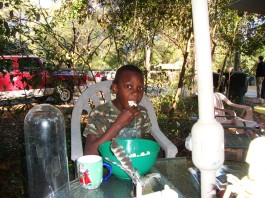